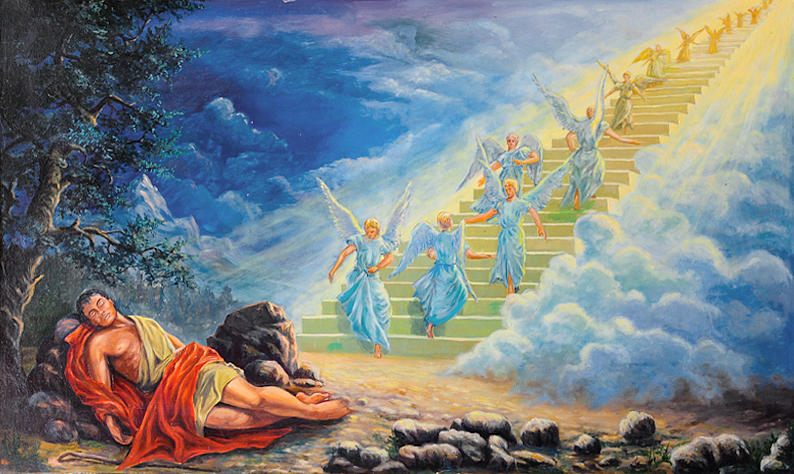 “Starting upon the long journey immaculate; descending more and more into sinful matter, and having connected himself with every atom in manifested Space – the Pilgrim, having struggled through and suffered in every form of life and being, is only at the bottom of the valley of matter, and half through his cycle, when he has identified himself with collective Humanity. This, he has made in his own image. In order to progress upwards and homewards, the ‘God’ has now to ascend the weary uphill path of the Golgotha of Life. It is the martyrdom of self-conscious existence. Like Visvakarman he has to sacrifice himself to himself in order to redeem all creatures, to resurrect from the many into the One Life. Then he ascends into heaven indeed; where, plunged into the incomprehensible absolute Being and Bliss of Paranirvana, he reigns unconditionally, and whence he will re-descend again………….” The Secret Doctrine, i 268

“Visvakarman once performed this sacrifice, and having performed it he overpassed all beings, and became everything here; and verily he who, knowing this, performs the Sarvamedha (Hindu sacrifice of universal or power-creating efficacy and consists in the self-offering of the creator Svayambhu on behalf of his creation), or who even knows this, overpasses all beings, and becomes everything here.
It was Kasyapa who officiated in his sacrifice, and it was concerning this that the Earth also sang the stanza;–‘No mortal must give me away; thou wast foolish, Visvakarman, she (the earth) will sink into the midst of the water; vain is this thy promise unto Kasyapa.’” ,,,,,,,,, Shatapatha Brahmana of the Yajur Veda

This is a wonderful way of explaining the descent of the soul from the highest state to the very nadir of corruption and then the return. This cycle of consciousness is of infinite existence. All mythologies dealing with spiritual redemption of mankind use this template.
The first reference is from Madame Blavatsky who captures the essence of this process in her writings “The Secret Doctrine”.
The second references I have given from the Yajur Veda which demonstrates the sequential process involved.

Let us start at the various stages of the soul of man from his current material consciousness and the final return to the highest perfection of the Godhead. The Secret Doctrine explains how the immaculate state of the soul gets encrusted with material layering in the process of manifestation (or self-creation) and finally starts the return journey upward toward perfection. The passion and sacrifice of Christ is the framework in this esoteric mythological narrative. In the Biblical text the process appears open ended from the creation of man in the Divine image in Eden to Christ giving up the corruption of the human form and attaining the full Divine status in Ascension, forty days after his death on the cross. But deeper reading of the Bible will show that the process is not complete. The second coming of Christ .” (Act 1:10) and the entire narrative of the descent of New Jerusalem in Revelation, (The entire chapter 21) are the subtle indication of a cyclic process worded in the Hebraic language and culture.
But in the Yajur Veda, Vishwakarma, is the Personification of ultimate reality and deity of the creative power, performs the ‘Sarvamedha’ which means ‘universal sacrifice’. This is the process of infusing the divine consciousness into matter. This is a process which addresses as to when no-life becomes life. This also requires a revised definition of what we call no-life. In normal biological term, it is a state of matter, such as elements and molecules, which has not yet attained the capacity for self-replication and information processing capacity. It is similar to the hardware and firmware in any computing system with capacity for information processing to attain capacity for higher complexity. This no-life to life transition and the activating agent is still beyond the grasp of current level of advancement in Biology. This is where a mythological language is invoked to indicate a deeper level of substratum, with infinite potential, for creation. How I come to this conclusion is a reference to a deep cosmological dimension relevant in the conversation of Vishwakarma with Mother Goddess, whom he had decided to sacrifice along with all his possession. “No mortal must give me away; thou wast foolish, Visvakarman, she (the earth) will sink into the midst of the water; vain is this thy promise unto Kasyapa”. This is further amplified in .”Mahabaratha’ in  ‘Thitha-Yatra-Parva’ where it is said: “I going to descend into the bottom of the nether world.’ Then when the blessed saint Kasyapa beheld the goddess Earth, despondent and sad, he, O protector of men, performed a propitiatory act calculated to appease her wrath. And then, O Pandu’s son, the Earth was pleased with his pious deed. And she uprose again from within the waters, and showed herself in the form of a sacred altar. This, O king, is the spot which distinctly manifests the form of an altar.”.
The altar is the place where upon the sacrifice is offered and hence one can not offer the very base on which the sacrifice is made. The indication that the Goddess Earth sank and rose from the ocean is indicative of mythological reference to universal consciousness.
Hence when created life transits from life to no-life state. a divine merger takes place. This in mythological language is called ‘Self Sacrifice or Svayambhu’. Christ’s sacrifice decent into nether world and resurrection and Vishwakarma’s sacrifices are indicative of eternal cycle of creation-annihilation-creation. The Vedic cosmology has always indicated this process.

From an individual perspective, our redemption from our current state of downgraded consciousness in materiality is only through an inner sacrifice with eradication of all impeding attributes towards the plenum of the spirit. I will conclude with a quote from .”  ……….Paramahansa Yogananda

“As water by cooling and condensation becomes ice, so thought by condensation assumes physical form. Everything in the universe is thought in material form. The spirit could not create matter as anything different from itself, for it had only itself as the tissue or material with which to build the cosmos. There is essentially nothing in the universe but mind or Consciousness. Everything is spirit – in essence, though hidden in manifestation. If you had the perception, you would see God in everything.”

I hope I have been able to provide some holistic food for thought through two varied mythological references.