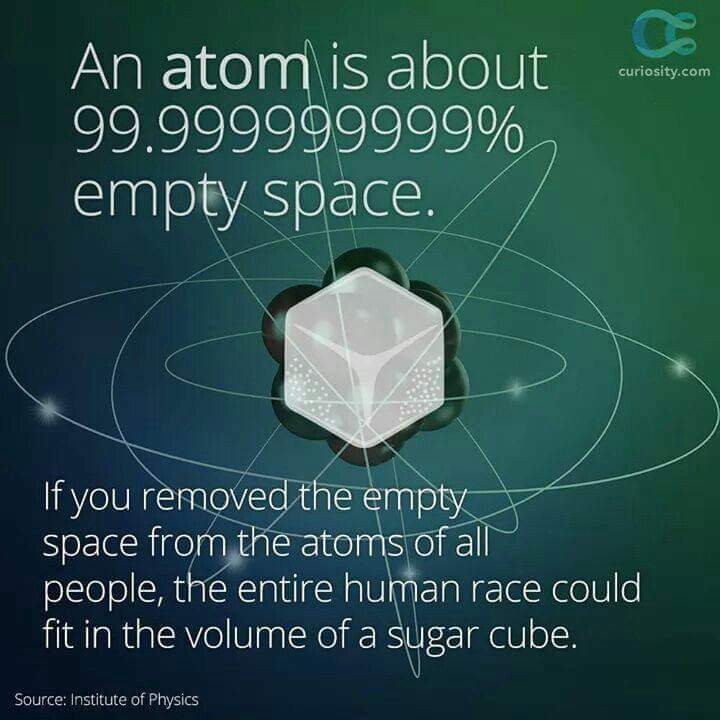 “The intangible represents the real power of the universe. It is the seed of the tangible.”
~ Bruce Lee
“Concerning matter, we have been all wrong. What we have called matter is energy, whose vibration has been so lowered as to be perceptible to the senses. Matter is spirit reduced to point of visibility. There is no matter.”
~ Albert Einstein
“There is no matter as such – mind is the matrix of all matter.”
~ Max Planck
“Physicists have discovered that the apparent solidity of matter is an illusion created by our senses. This includes the physical body, which we perceive and think of as form, but 99.99% of which is actually empty space. This is how vast the space is between the atoms compared to their size, and there is as much space again within each atom. The physical body is no more than a misperception of who you are. Buddhists have known that for over 2,500 years. “Form is emptiness, emptiness is form”, states the Heart Sutra, one of the best-known ancient Buddhist texts. The essence of all things is emptiness.”
~ Eckhart Tolle
“’Emptiness’ means empty of a separate self. It is full of everything, full of life. The word ’emptiness’ should not scare us. It is a wonderful word. To be empty does not mean non-existent. Emptiness is the ground of everything. Thanks to emptiness, everything is possible. “
~ Thich Nhat Hanh
“As water by cooling and condensation becomes ice, so thought by condensation assumes physical form. Everything in the universe is thought in material form. The spirit could not create matter as anything different from itself, for it had only itself as the tissue or material with which to build the cosmos. There is essentially nothing in the universe but mind or Consciousness. Everything is spirit – in essence, though hidden in manifestation. If you had the perception, you would see God in everything.”
~ Paramahansa Yogananda
“If you got a hold of a giant electronic microscope and you put your body under the microscope, you would see tremendous amount of space. You would see atoms separated by a vast amount of space. And if you obtain an ultra-electronic microscope, which hasn’t been invented yet, you would see your body as pure space. There would be no atoms. For the ultra-electronic microscope would see through the atom and you would see space, total space. That space is Consciousness. This is not only true of your body. It is true of the chair, the building, a tree, a flower, an animal. Everything is space.”
~ Robert Adams
“The belief in a world made of matter is just a belief, it is a conditioning. Nobody has ever found it. It’s like thinking the earth is flat. It is an interpretation, not a fact. If we stay very close to the facts of our experience, we never find a stuff outside Consciousness, called matter. The reason we all experience the same world is not that there is a world made of matter appearing outside Consciousness. It is because each of our finite minds is precipitated within the same infinite Consciousness. It is because our minds share Consciousness that we feel we share the world. We do share the same world, but the world we share is made of Consciousness, not matter, and we are that very Consciousness.”
~ Rupert Spira

DEFILEMENT THROUGH DESIRE
GRACE AND FREE WILL